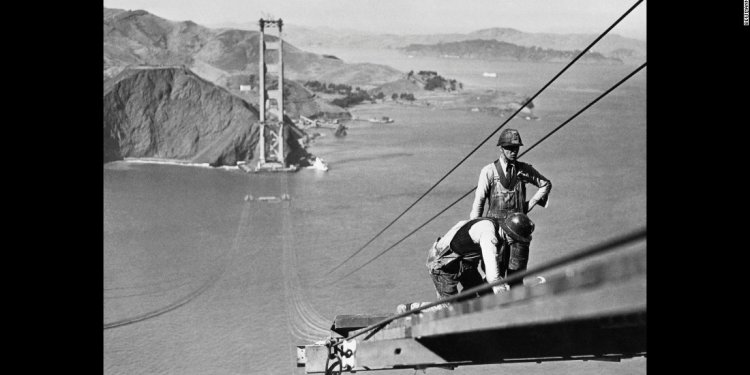 When did the Golden Gate Bridge open

A foghorn blared in to the Ca dawn at 6 a.m. on May 27, 1937, to signal the official opening associated with Golden Gate Bridge. That time, nearly 200, 000 people walked, ran, tap-danced and roller-skated across what was then your longest suspension connection in the field. A day later, the Golden Gate Bridge launched to automobile traffic. As San Francisco’s signature landmark celebrates its anniversary, explore six astonishing facts about this modern-day marvel of manufacturing.

1. The military wished the Golden Gate Bridge to be painted in stripes.
The U.S. War division initially objected into building associated with the Golden Gate Bridge as it dreaded that Navy ships could be trapped in bay area Bay if span had been bombed or collapsed. The army eventually offered its endorsement, but it wanted the bridge to be covered in garish stripes. The Navy, concerned with presence for moving ships in foggy circumstances, pushed for black and yellow stripes to be painted regarding Golden Gate Bridge. The Army Air Corps pushed for an even more festive, if not less gaudy, candy-cane mix of purple and white stripes to help make the connection much more apparent from environment.

2. The Golden Gate Bridge’s signature shade had not been designed to be permanent.
The steel that found its way to San Francisco to construct the Golden Gate Bridge had been covered in a burnt red and orange color of primer to protect it from corrosive elements. Consulting designer Irving Morrow found that he preferred the vivid hue of primer to even more conventional paint alternatives eg carbon black and steel-gray. The “international orange” color had not been just noticeable when you look at the fog, however it complemented the normal geography associated with the surrounding mountains and contrasted well using cool blues of this bay and the sky. Morrow finally selected the strong primer shade, meant to be short-term, to coat the bridge. (The custom formula, made by Sherwin-Williams, is not any key. It can be found on the bridge’s webpage.)

3. The Golden Gate Bridge’s initial design had been universally declined.
The bridge’s original design, made by main engineer Joseph Strauss in 1921, ended up being a clunky hybrid of a cantilever and suspension system bridge that according to one critic resembled “an upside-down rat trap.” It had been practical, but definately not elegant. Strauss decided to scrap the look, and then he later on brought competing designers onto the task to produce an even more graceful suspension system bridge design.